A wasp or hornet problem on your Raleigh area property can be dangerous. There have been reports of serious injuries when a swarm of wasps or hornets attack a pet or a person. Usually these wasp or hornet attacks happen by surprise – you have no idea of a wasp, hornet, bee, or yellow jacket nest until you are attacked.

If you are experiencing a problem with wasps, hornets, or other stinging pest, contact Aardvark Exterminating for swift pest control services. 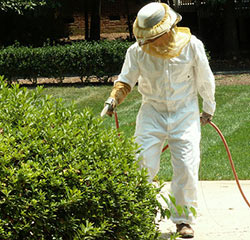 Hornets are a member of a social wasp with nests (or a hive) of a paper-like material composed of chewed plant leaves and bits of wood. The hornet nest is typically situated within the foilage of a tree or shrub that hides the nest from casual view. A hornet will attack and bite it’s victim multiple times. Hornets have been reported to chase their victim for over a half mile to drive the victim away from the nest. A single nest may contain up to 15,000 hornets.

Yellow jackets and their nests are often found near houses. They like to build in small cracks or on corners – for some reason they like porch light fixtures. Like the hornet nest, it often happens that you have a yellow jacket nest without knowing it until someone gets stung. The yellow jacket sting can be very serious for people sensitive to their venom (an allergic reaction), or if a person is stung many times simultaneously.

The stinging wasp is similar to the yellow jacket. Wasp nests may be a straight burrow in the ground, but others such as mud daubers and potter wasps, build a nest above ground and attached to trees, rocks, or your house. Each paper-fiber-like nest contains numerous combs, densely packed cells for the larva to develop and grow in. The adult wasps stay close to the nest to protect their growing young. This, of course, is why they attack YOU.

All stinging wasps defend themselves by stinging the victim with a “stinger,” (an ovipositor that injects venom). Males do not have a stinger. The initial “sting” feels kind of like a hypodermic needle and hurts. The venom typically causes a swollen place on the skin which continues to hurt. Again, certain people have a very serious allergic reaction to a wasp or bee sting and this could require immediate medical attention.

Some wasp, yellow-jacket, and hornet colonies can respond to a threat with more than 100 defenders, each capable of delivering several stings. These species should be left alone in the wild, but should be removed professionally if they are close to your home. Your pets and children could be vulnerable to a defensive attack. Many times a parent will not know/realize that their child is allergic to bee stings until it happens.

Wasp venom contains factors that release histamine, which dissolves red blood cells. Most people can survive many stings, responding with only temporary pain and swelling, but to hyperallergic individuals-about 1 percent of the population-a wasp sting can be fatal. If you are stung by a wasp, seek medical attention. If your pet is stung, find a nearby animal hospital if needed. 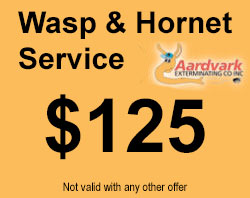